The Vuelta Cerdanya Ultrafons (or VCUF) is an endurance event organized each year by Eduard Jornet, father of the world’s greatest endurance athlete, Kilian Jornet. From the rustic town of Puigcerdá—nestled along the Spain/France border near Andorra—four trail running races take place over the course of a long weekend: a 14km race, a 35km race, an 87km ultra-race and the ultrafons itself, at a mind-boggling 214km! 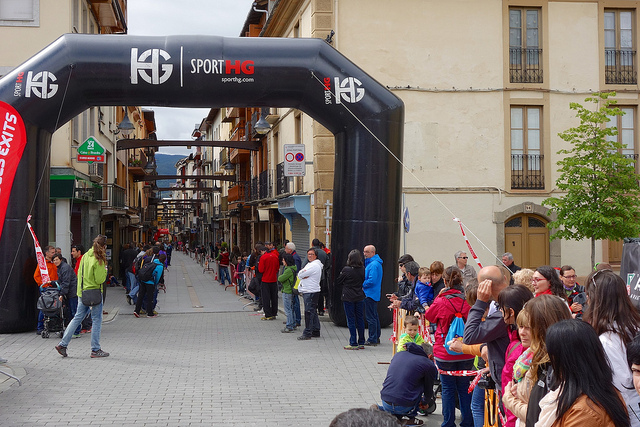 The beautiful town of Puigcerdá

Last year in 2012, RaceSplitter was invited to provide the timing services for the inaugural edition. Based on that experience, our team was invited back again this year, to time the 2013 edition. (Although our focus at RaceSplitter is the sale of the RaceSplitter product, we do enjoy occasionally getting out there and timing events ourselves!)

After the success of the inaugural edition in 2012, nearly 1,000 people registered to participate in the four races of the 2013 edition, and so we at RaceSplitter decided to organize a full-sized team to support the event.

When considering who to recruit, the natural choice was our nearby trail running club, Grupo Alpino Benalmadena. Over the past years, they’ve been using RaceSplitter in the timing of all their events and were eager to help out.

The team was led by José Carlos del Toro and supported by Tere Angulo, Alberto Fernandez and Rogelio Macías. Our contact at the VCUF was Gael Piguillem, who turned out to be super organized, super friendly, and super helpful! 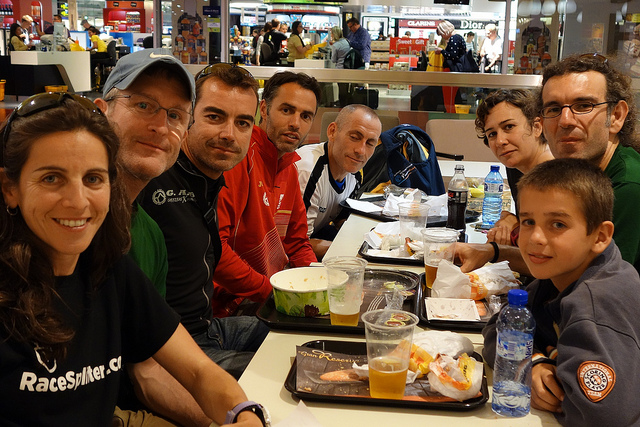 So with the full team in place, we got to work!

Creating the race pages at RaceSplitter.com

About a week before the event, Gael emailed us a spreadsheet containing the start list data—name, bib number and category—for each of the four races that would take place over the weekend. With that data, we created the four official races within the VCUF profile page at RaceSplitter.com. In addition, we also uploaded the race track files (in GPX format).

Creating the race pages early allowed Gael to pre-announce them to the public, since those same pages at RaceSplitter.com would later display the live race results during the event.

In addition to timing the finish of all the races in Puigcerdá, we also wanted to take four intermediate times in the 214km race (so that the fans could follow the developing results at RaceSplitter.com) and to take one intermediate time in the 87km race.

Timing four races—some overlapping, including intermediate points, across a handful of towns—would clearly present a logistical and planning challenge! So we got to planning!

How many devices would we need?

First we needed to determine how many devices would be needed.

Plotting the four races, day by day, in a spreadsheet, allowed us to determine that a total of four devices would be needed:

Avoiding the creation of erroneous splits

RaceSplitter was originally created for coaches to time lap-based races, in which each subsequent timing of a given bib number creates an additional lap (split) on the race.

While this is great for coaches, it can create problems for traditional race timers, since it’s so easy to accidentally time the same bib number twice (for example, timing 132 when you meant 123). When this happens in a traditional race, it can be confusing for the timer to suddenly see the creation of “Lap 2”!

To address this problem, we created a race setting in which you can disable RaceSplitter’s auto-lap mode. When auto-lap mode is disabled, if you time racer 123, and then later accidentally try to time 123 again, RaceSplitter will create a timing entry for the bib number “100123”, i.e. a bib number much higher than any other bib number in the start list, but numbered in a way to reveal the bib number you tried to time (123, in this example). This guarantees only one split on the race, while still not blocking you from timing a given bib number twice (since we create a new bib number that you can later correct.)

We came up with a neat solution

Our approach was to load the 214km race twice on each device that needed to time two splits. Here’s the procedure:

Coordinating the start of the race clocks. It would be important to start the RaceSplitter timer on the iPad 1 at the correct race time, since that device would be timing the race finish. But also, it would be important to start the timer on the iPad 3’s “VCUF 214 (Split 1)” race at the correct time as well, since that race would be first to publish results to RaceSplitter.com during the event—since RaceSplitter.com, when receiving published results, will use the earliest seen race start time as the official start time.

The race clocks in all the other VCUF 214 RaceSplitter races (splits 2, 3 and 4) could be started anytime later.

Important note. Importing multiple, uniquely-named copies of the same race worked beautifully for the VCUF event—allowing us to time multiple splits on a given race, with auto-lap disabled, preventing any chance of creating erroneous splits on the race.

If you take this approach in your own event, there’s one thing to watch out for. You have to import the race multiple times from the source email attachment; you can not use RaceSplitter’s built-in “duplicate race” feature. When you duplicate a race in RaceSplitter, the new race will have a different internal race ID—meaning their results would be published to different races at RaceSplitter.com.

To ensure that all the races have the same internal race ID, you have to import them multiple times from the same email, rather than duplicating them in RaceSplitter.

In the days leading up to the event—including, in some cases, just a few hours before the races!—Gael would need to make start list changes.

When that happened, he’d simply email us the updated Excel spreadsheet, and we’d export the data in CSV, change its encoding to UTF-8 (to ensure proper representation of extended characters) and upload the CSV files to the races at RaceSplitter.com.

After the races were updated at RaceSplitter.com, we’d then download fresh copies by email and re-import them into the various devices. (This of course required deleting and recreating those multiple copies of the split-specific races on iPad 3 and the iPhone!)

Having done the proper planning, the timing of this very complex event went off without a hitch.

Due to bad weather (rain and dropping temperatures), the 214km race had to be closed in Alp, so it turns out that “Split 4” represented the end of the race.

All during the race, the RaceSplitter timers were continually publishing results back to RaceSplitter.com, so the world could follow along.

We followed the same process for the 87km race, and the 35 and 14km races (although those were too short to time intermediate points.)

If you’re interested, you can click here to see the 214km race results, and navigate between all the various splits on the race.

So the event was a big success, both for the race organizer and for RaceSplitter. The timing was innovative (being able to include so many intermediate points) and the fans and race organizers loved having up-to-date progressive results online. All weekend long we were getting high-traffic alerts from the RaceSplitter.com website, confirming the popularity of the event! We can’t wait to get back there in 2014!

And finally, it was a real treat to have the presence of the world’s greatest endurance athlete, Kilian Jornet! 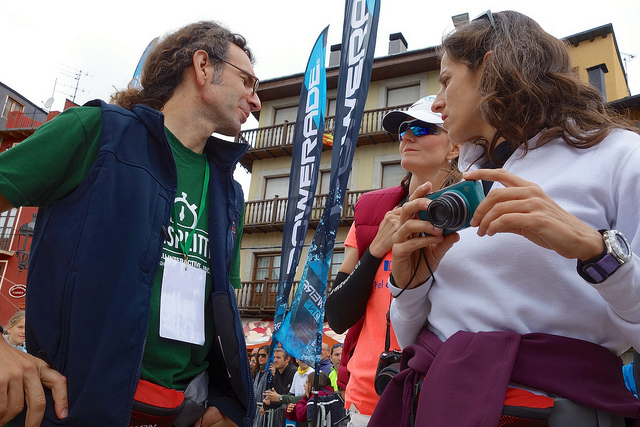 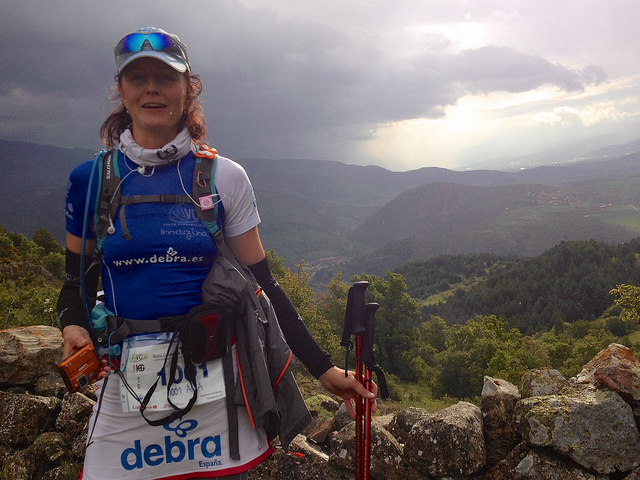 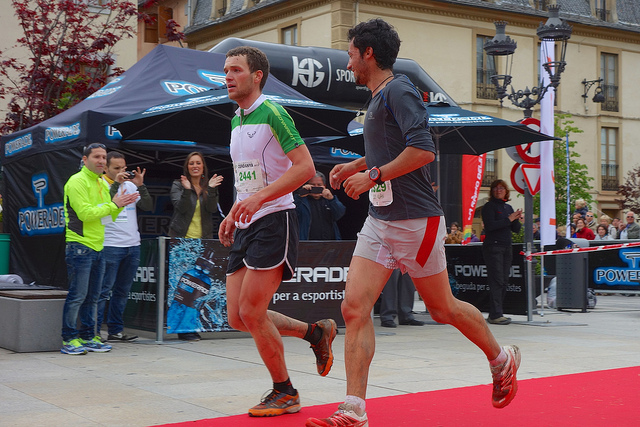 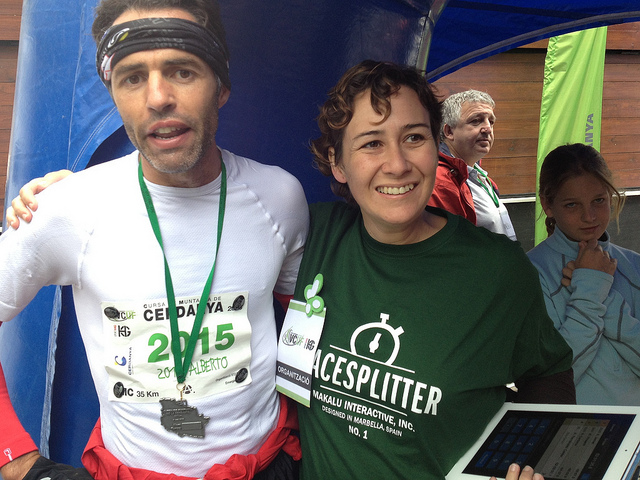 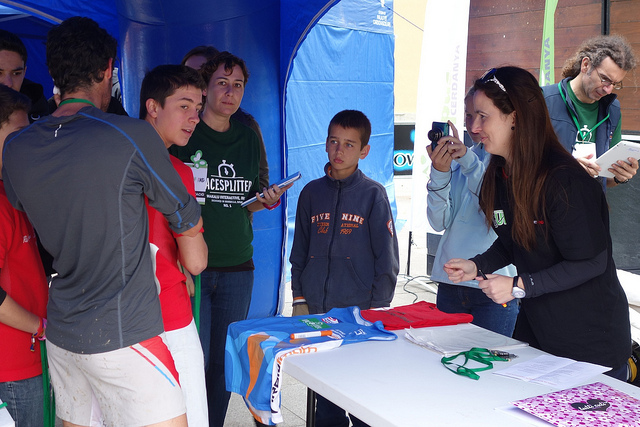