Timing of the INFINITA Ultra Trail with RaceSplitter

A few months back, I received an email from Ramiro Rejón, owner of a local Spanish company called “Avent y Event” — organizers of the popular series of local ultra trail running events, including the Animal Trail (in El Burgo) and the Inferno Trail (in Tolox). He and his partners, JuanMa and Yolanda, wanted to talk about the possibility of using RaceSplitter in their newest event, the INFINITA Ultra Trail, taking place on Saturday, June 25, in Cortes de la Frontera, Spain. 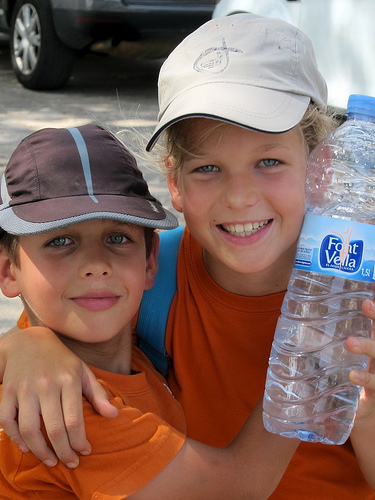 To better understand RaceSplitter’s usage, Ramiro met me at the “Carrera de las Aguas” event in Istán, where we setup and timed the race together. Having used the product in a real event, Ramiro decided that he wanted to use RaceSplitter, but his partners were still apprehensive; it’s a new product, requires manual data entry, etc. Can it really be trusted for such an important, commercial event?

I encouraged Ramiro to just go for it, and join the hundreds of organizations successfully “doing it themselves” with RaceSplitter. Considering the cost savings — a one-time 20€ purchase, compared to over 1,000€ to contract a professional timing service — Ramiro and his partners decided to trust their race to RaceSplitter.

Still a little uncomfortable, I agreed to join them for the event, and lend a helping hand.

One of the reasons Ramiro and his partners were apprehensive about using RaceSplitter, related to the complexity of the event they were planning. The INFINITA Ultra Trail would actually include three concurrent events:

In the interest of the spectators, the course consisted of three loops, each of which began and ended in the Cortes sports center:

We decided to organize the RaceSplitter timing by creating three separate races.

On Friday evening the three races were created online at RaceSplitter.com by uploading a CSV file containing each racer’s name, bib number and category. Ramiro, JuanMa and I each downloaded the races to our iPhones (and my iPad) and then imported them into RaceSplitter.

When I arrived to Cortes on Saturday morning, a few changes and additions needed to made. We logged into Ramiro’s account at RaceSplitter.com, made the changes (adding a couple of participants, changing the category of others).

When finished, RaceSplitter.com emailed each of us fresh copies of the race files, which we all imported into RaceSplitter. At this point, we were ready to go. 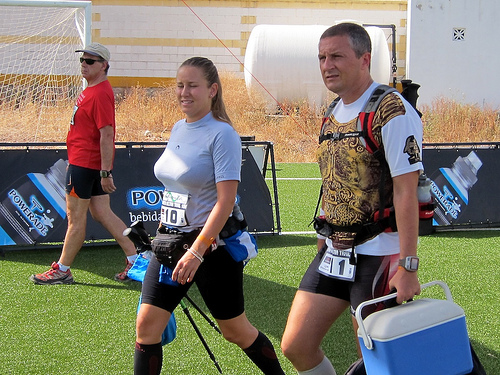 At 5:30 pm — 30 minutes prior to race start — one of the marathon runners decided he wanted to participate in the Ultra. Ramiro initially said no since we were so close to start time, but then I told him it’d only take 5 minutes to update RaceSplitter.

Using the “Personal Hotspot” feature of the iPhone 4 to create a wifi network, we used my MacBook Air to connect to RaceSplitter.com, and make the change to the race files, which were automatically emailed to myself, Ramiro and JuanMa, at which point we quickly updated our copies in RaceSplitter.

The update took less than five minutes; no problem! 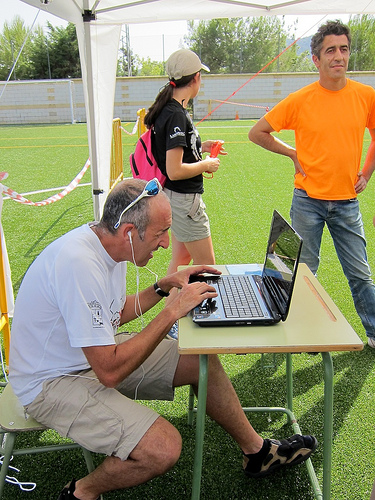 At 6:00 pm, all three races were started. On my iPad, I started the 13km race, and the 42km marathon in RaceSplitter. The idea was that I would time the 13km participants arriving, ignore the 42km as they passed the 13km point, and then switch races to time the 42km racers a few hours later when they’d returned from the 29km second leg of the race.

JuanMa started the Ultra race on his iPhone. (We had agreed that I’d time the 13km and 42km races, and then head back to the hotel, while he stayed on until 4am timing the Ultra runners doing their laps.) 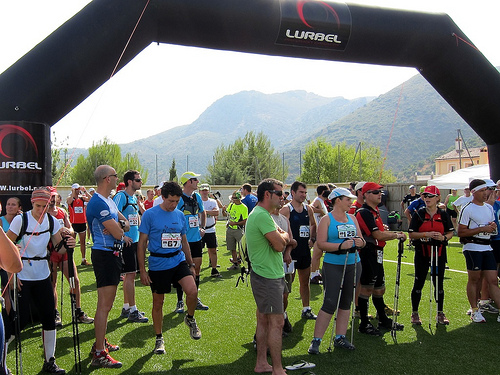 Given how hilly the 13km course was, it occurred to me that racers would not be arriving in large groups, and so I decided to try to time all the arrivers — both 13km racers (finishing) and the 42km at their 13km split point.

Turned out, this worked fine. I was able to easily switch between the two active races, and time the participants in their appropriate races (remember, their bibs were color coordinated to indicate to which race they belong.)

After the last 13km runner arrived, I stopped the race, and immediately published the results to RaceSplitter.com:

Ramiro, with his own wifi connected laptop, accessed this page, and printed out all the category results. The racers were amazed that within five minutes of the race conclusion, the printed results were posted for all to see! This also allowed Ramiro to hold their awards ceremony immediately, so that those who needed to, could go home without having to wait for the other races to conclude. 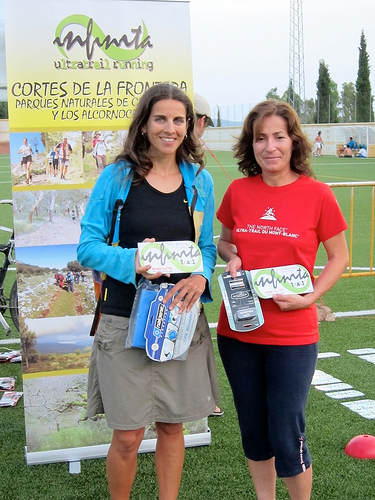 At this point, the 42km marathoners were out on the second 29km leg of the race, and I had a moment to relax.

A few hours later, the red and black bibs started arriving. I timed each arriving racer, concluding the 42km race, while JuanMa recorded the first split time of those black-bibbed racers — i.e. those who would continue running the 5km laps of the 10 hour Ultra. (So, in the Ultra race, the first split corresponded to the marathon leg of the event.)

Once again, I tapped a button in RaceSplitter to instantly publish the results of the 42km marathon to RaceSplitter.com:

And once again, Ramiro was able to give the awards to the marathoners. 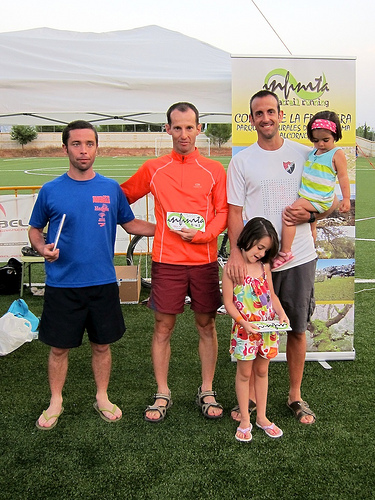 Each time that Ultra runners would return from a 5km loop, JuanMa would record a split time for them in RaceSplitter. At 4am, the Ultra race concluded, and JuanMa published his race results to RaceSplitter.com.

What can be seen from these results is that presently RaceSplitter.com doesn’t support an ideal results listing for a race which has a fixed time, as opposed to fixed distance. In the above results, every participant except the winner is listed as Did Not Finish (DNF), since only the winner ran eight loops. However, the results are listed in correct order, so that, ignoring the DNF labels, the results could still be printed and used in the awards ceremony.

(We’ll be making an update later to address this.)

After the race, I was talking to both Ramiro and JuanMa, and they were absolutely ecstatic about RaceSplitter, and plan to use it in all their future events.

They agreed that the biggest challenge for the product is to effectively communicate to race organizers: 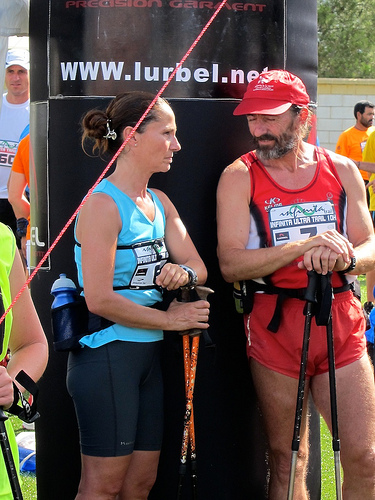 To see all the photos from the event, click here.